Its popularly called as rajma chawal, which means red kidney beans curry and rice. It is one of the comforting dishes you will ever make.

Rajma masala is such a filling and comforting curry which can be enjoyed any time of the year. Especially good on a cold winter day.

The most common way of making rajma doesnot have cream and butter in them. Both these ingredients add richness and make this dish more tastier.

Can I use canned beans?

Yes you can use canned kidney beans in this recipe. Strain the water it comes in and wash before using it in the curry.

Can I freeze rajma curry?

You can freeze it for up to a month. Defrost or refrigerate for few hours and re heat in the microwave or in a pan, stirring often. Add some fresh coriander and squeeze some lemon juice before serving. 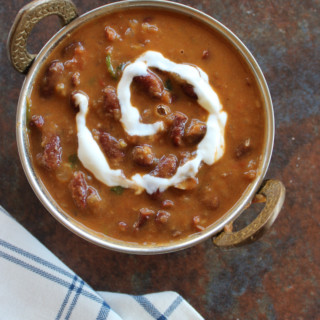