Chana dal Payasam is a traditional sweet made with chana dal, sago, milk and jaggery. Its a popular south indian payasam made during festivals.

Payasam is also called kheer in North india. In Andhra Pradesh,Chana dal payasam is called Senaga pappu payasam. In Tamilnadu its called Kadalai Paruppu payasam. Its a delicious, tasty and healthy dessert made during festivals and gatherings.

South India is popular for different varieties of payasam recipes. The base for the payasam is generally milk, jaggery/sugar, nuts and cardamom. The main ingredients can be either vermicelli, rava, moong dal, paneer. In today’s recipe the star ingredient is chana dal along with sago/saggubiyyam.

Step by step pics on how to make chana dal payasam

cook chana dal in water and drain the excess water.

Cook the sago/ sabudan in two cups of water.

Grind the cashew and coconut with milk to a smooth paste.

Boil Jaggery in a cup of water.

Add the cooked sago to the jaggery mixture.

Cook the sago in the jaggery syrup for couple of minutes.

Add the coconut and cashew paste to the sago, jaggery mixture.

Add milk and cook the whole mixture for five minutes.

Add the cooked chana dal and simmer the payasam for ten minutes.

Finally add the ghee roasted cashew and cardamom powder. Give a final stir and turn off the heat.

Few Payasam recipes from the blog –

If you are looking for more recipes, do check out my you tube channel – Madhu’s Everyday Indian 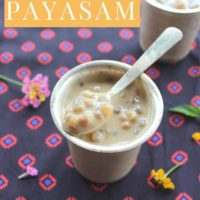